The Meaning of Life is Rain Puddles

Okay, now that I’ve got your attention…..

Here’s an update on “Tiger in the Jungle”. It’s coming out lower key than I intended, but I expect when I go over it with the blender, it will pop. Also, I’m at a very tedious point, the background. It would be good to listen to my iPod during this…but I lost the charger. Dammit. 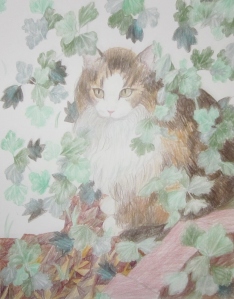 Also, I did an art show, doing portraits. Had 13 customers. So, I know in the right venue, this works. Here’s my partial set-up.

And, as usual, I’m itching to get started on the new picture. When the Twin Towers were standing, twice a year, the sun would set between them….kind of a World Trade Center Solstice. I once tried to take a picture of that with a film camera, and a zoom lens, but it came out terribly blurry. And now, the opportunity is lost forever. *sigh*. But that’s what I intend to do with this drawing.