Come on in, the Water’s Fine!

Sometimes, without a real plan, you just have to jump into a drawing.  I took a photo, since I’ve been lost for an idea, and planned to draw it.  I made a pretty sketchy sketch, giving little insight to me on how to %(@@#ing handle the large drawing. 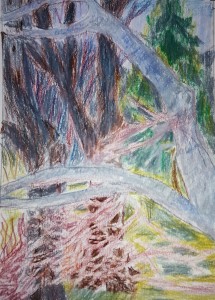 So after much deliberation, I decided not to be deliberate.  I’m going to jump in, feet first, and improvise what I am doing as I draw.  Maybe it will work, maybe not.  What is life without suspense and mystery after all?

Here’s a peek at the very beginning of the big drawing, and not so coincidentally, my new studio, which is actually just a corner of the living room.  Yes, the intended designer showcase entertaining area, has become part office/media center/studio.  I’ll be entertaining guests in the kitchen, probably.

It’s not as messy as my old studio..but give me time. 😦