Calamity Roxy and the Color of My Dreams

Still plugging away at Floral Overload, but I tellya it’s slow.  I’m working a lighter week at my day job now, so I do have more time…but remember how messy I am?  Well, it’s gotten to the point where I have to interrupt my (ahem) great art career, and shovel some of the clutter and dirt in this apartment.  So, slowly, Floral Overload will continue to go.

But I had a delightful experience (well, almost) at a networking meeting in Brooklyn.  I agreed to do live painting, and had a great time.

I thought at first I would just get up and push paint around as the feeling suited me, but then I realized….I could waste a lot of time, paint,and come up with a disaster.  So, I had a thunderous insight, I better the hell have some kind of plan.  But what…went through color combinations in my mind came up with green and gold, which caused the song, Karma Chameleon to go through my head…..

So, the color of my dreams, they’re green and gold, it is. 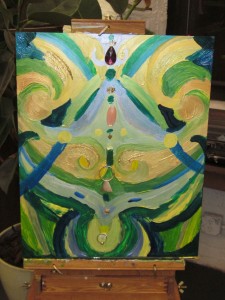 This is one of the Namaste series pictures. The person who invited me to do the painting is a particular fan of those. So, here’s an action shot…..I promise a video soon.

So, Shane Kulman is the woman who invited me.  I gave the painting to her, and she’s going to make a contribution to charity for it. 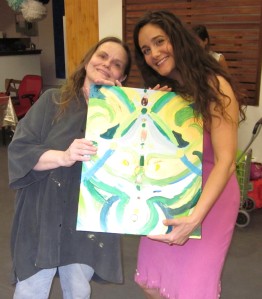 Now the calamity part….the car died. I mean really died, kaput, dead RIP. Gone to automotive heaven. We rented a van to go to the event, which was an event in itself. Not a good one, though.

So, I guess I’m out of the art show biz for a while.

2 responses to “Calamity Roxy and the Color of My Dreams”