Last night was the reception for the show.  It was a lot smaller than it was last year, and the AC actually worked this year!  I was delighted that the manager from my job, Dave, and his lovely wife Kelly came.

There was a lot of interesting work from local artists from Western Queens.  I thought that the theme of the show was to have work relevant to the area..evidently I was mistaken.  It was a really eclectic selection of art. 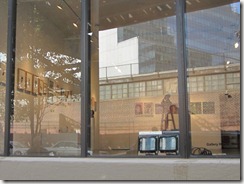 This is the outside of Gallery M55, where the show was held.  The picture was taken before the show actually started.

Here are my two pieces hung in the little entrance hall.  The entrance hall seemed to be the place where smaller works were displayed.

So I was not hung over the punchbowl this time.  In fact, there was no punchbowl, but in the entry was a bucket of beer, some wine, water and potato chips.

I was annoyed by one thing, though.   In the entry form I received, they said there was a size limit of 20 inches on a side, framed.  So I did not enter my more finished, larger works.  When I got to the show, I saw there were some pictures that clearly were larger than the limit.

Here is the main room of the exhibit, still early, while people started to come in. 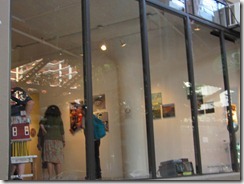 Here’s another picture from the outside, once the show really got going.

The art at the show was all very good, I must say.  I don’t know if they’ll do it again, next year, but I’ll try to enter again.